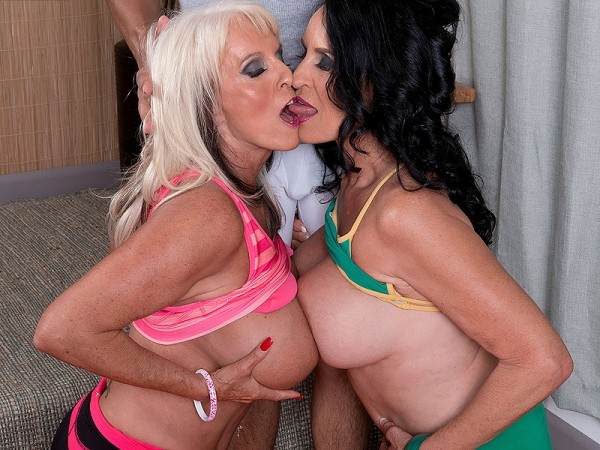 In this scene, Rita and Sally are getting ready for Yoga class. Their big, GILF tits are popping out of their tight tops. They’re talking about their Yoga instructor. Rita wants to be “more flexible.” That’s so she can get fucked in even more positions. We’re glad that Rita and Sally both acknowledge the connection between Yoga and sex. They demonstrate how some of the pelvic thrusts often used in Yoga are also helpful when a woman is getting her pussy eaten. Thrust and lick!

Yoga is supposed to be a time for relaxation and meditation, but Sally and Rita can’t relax because all they’re focused on is the instructor’s cock. They become even more explicit as they ask the Yogi to critique their positions. Before they know it, the instructor is rubbing their pussies through their tights. Then he’s rubbing their clits and taking out their tits. Is that the kind of thing that’s supposed to happen in a Yoga studio?

It is in this one.

Before long, the ladies are going down on his cock and sucking his balls and passing it back and forth. Sometimes one sucks the cock while the other licks the shaft. Then they’re getting fucked in all kinds of positions that might, if you have a good imagination, be related to Yoga. Doggie style? Downward doggie? Okay.

“Lick his balls!” Sally says to Rita while riding the Yogi’s cock.

The cock goes back and forth from one old, wet pussy to the other. Finally, Rita and Sally open their mouths for the Yogi’s load. This might not be what goes on in the Yoga studio near you, but it’s what goes on in ours.