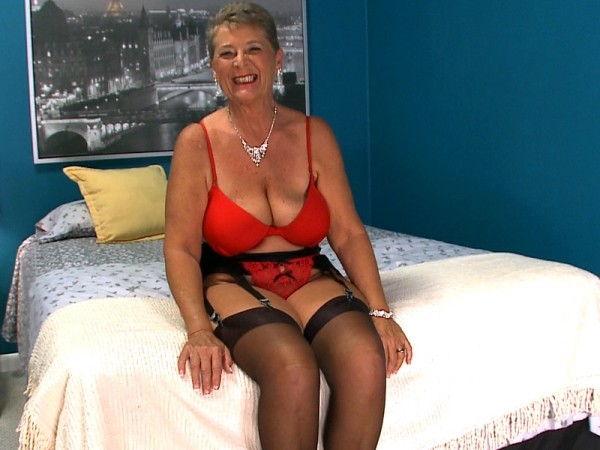 Having seen pictures of her having sex, we get to find out a little more about Joanne Price, a 64-year-old, happily married woman from out on the Illinois prairie. Joanne sits down for an interview wearing the same thing she was wearing in her photos (and will wear in her first hardcore video): a DD-cup bra, thong panties, stockings, a garter and heels. About halfway through the interview, she jacks a stud’s cock while talking, but early on, we find out what brought Joanne to our studio.

“My husband I just decided what we wanted to do in life, and we both decided we needed to do something different,” she said. “So this is one of them.”

More about Joanne: She enjoys reading, making crafts and painting. She and her husband live on five acres in a tiny town in Illinois. When she’s out in public, she likes to show off her body in short shorts or tight jeans and low-cut tops. She likes to walk around her house and yard naked, but, as we said, she lives on five acres where there’s rarely anybody else around, so she’s hardly a nudist.